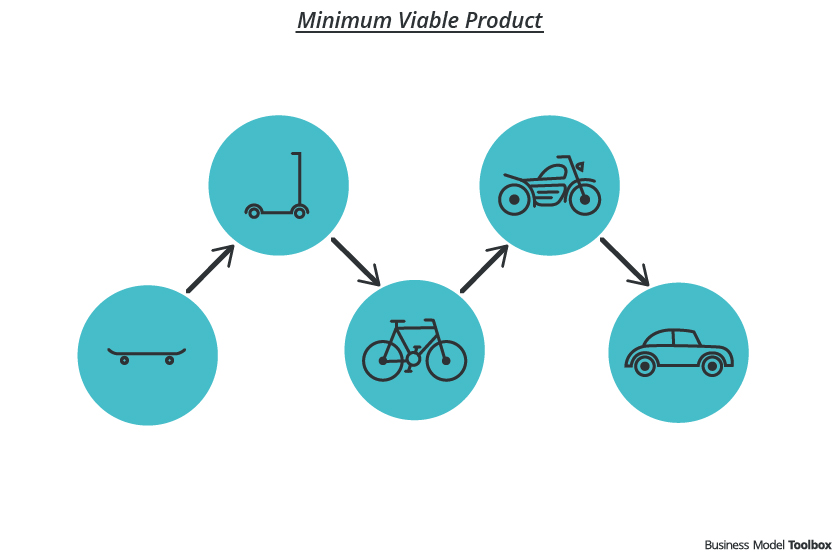 The Minimum Viable Product (MVP) is a prototype to test the core of your idea or the biggest assumption in your business model. Usually it does not cost much money and it is easy to apply.

“The first version of Gmail was literally written in a day.” – Paul Buchheit

So, the minimum viable product is that product which has just
those features (and no more) that allows you to ship a product
that resonates with early adopters; some of whom will pay you
money or give you feedback. — Eric Ries

A Minimum Viable Product (MVP) is a prototype that focuses on the most important part of a product or service. It is typically offered to a group of potential customers. The most important aspect of the prototype is viability in order to test the core of the value proposition, to learn from it and to be able to replicate the idea. This is not a pilot project, which instead is designed to test the final product with a selected customer group.

The concept of the MVP became popular with Eric Ries’s approach, in his book ”Lean Startup“.

The aim of a MVP is to avoid the risk of building products or services that nobody wants. Eric Ries defines the MPV ”The minimum viable product is that version of a new product which allows a team to collect the maximum amount of validated learning about customers with the least effort“. For example, Dropbox used the concept of a MVP and created a 3-minute explanatory video in order to demonstrate the product. Their sign-ups went up from 5,000 people to 75,000 overnight — without having a real product.

How to start
Use a Canvas Model or the Value Network and identify the core of your idea to test or the biggest assumption in your business model that needs to be verified.
Desirability
When reducing to the core of your idea you need to take care that the MVP stays desirable (= attractive / valuable)
Chose a specific type for your Minimum Viable Product

Have a look to the Examples on this page to see how a MVP can look like.

Responsibiliy
Consider the aspects of responsibility (raw materials, resources, transparency) when designing and testing your MVP

Reduces useless products
Early testing can help reduce the use of resources – money, time and other resources.
Get feedback on responsibility aspects
Focussing on the problem solution fit helps to create sustainable solutions and an empathy driven value proposition not only for the customer but also for all groups explored with this tool.
Problem / solution fit
If you decide to add responsibility (raw materials, resources, transparency) to your prototype, this would help you design a business model that is based on your defined values.

Dropbox
Their challenge was to demonstrate the working software in a prototype form. Therefore they decided to test it with a short video that explains the value and core functions >> “It drove hundreds of thousands of people to the website. Our beta waiting list went from 5000 people to 75000 people literally overnight. It totally blew us away.”