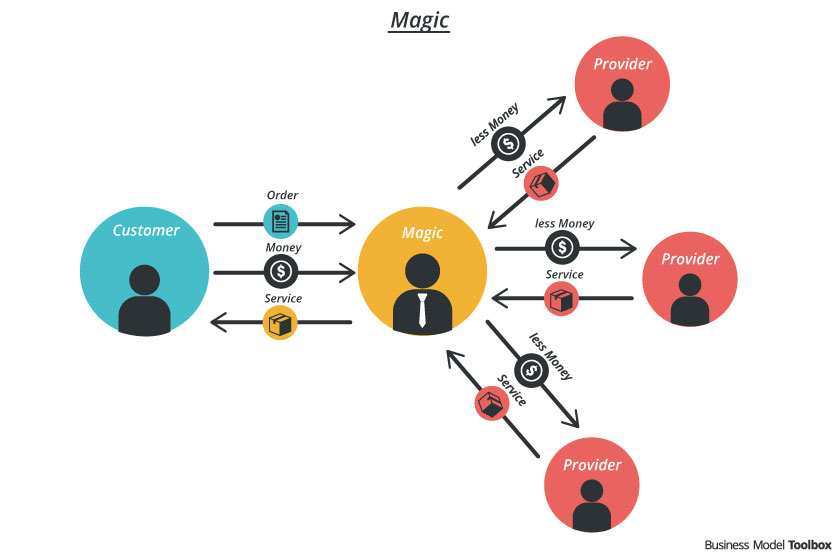 Magic makes wishes become true: the customer asks for any service via mobile device, Magic as a mobil personal assistant and aggregator searches for it and delivers it to the customer.

“You want an elephant delivered? Ask Magic to bring it to you”

The initial idea of the founder, Mike Chen, and his team was to create a simple text messaging service to order food or a driver, in comparison to existing apps with a multi-step process. On a Saturday in February 2015, they developed a simple site, with a number to send a text message to, that would try to make your wish come true. The page was published in Product Hunt and everything after that was ”Magic“: the service went viral and the waiting list for the service to “get you anything you want” exploded.

But competition is in sight: Operator is an app by Uber co-founder Garret Camp (not yet launched), that is carefully developed and covers the same service: Send a message asking for anything and they will do everything, including getting it delivered to you. While Magic was only a side project put together over a weekend, Operator is intended to change commerce.

A further clone of this concept is the Berlin-based GoButler.

Value Proposition & Customer:
”I would like to have….“ – this sentence is enough to trigger Magic to get it for you – as long as it is legal. All you have to do is send an SMS to Magic. A human operator will do the research and provide you with some options, and finally you only have to confirm and pay for the order.
Mission & Core Values:
Get whatever you want at any time and pay a little extra for the service in order to get what you need without having to think about the HOW. Moreover, the founder Mike Chen has said that quality and a well-paid team is important for him, because Magic should not be ”a service for the rich that tries to squeeze people.”
Value Formation & Core Activities
Magic operates as an aggregator for all services: it creates a logistics layer between customers and suppliers, by taking orders, figuring out who can fulfill them and calculating the prices.
Revenue Model
Magic charges a little extra, but as the service is still in its launching phase, until today there is no officially known overhead or fee that is added on the bill.

Organisation
Magic’s employees – the so called magicians – are there to handle the incoming orders and personally care for the fulfilment of the order and the information provided to the customer. They sometimes even care for the delivery themselves.

Fulfill the Value Proposition
The value proposition to the customer to “get you anything you want” is fixed, the big challenge is to clarify exactly how this is executed: fast and high-quality services are essential.
Scalable
The service is difficult to scale because with every new client more human operators are required in order to handle the increased volume of orders.
Infrastructure
This service can be offered in large cities with a dense infrastructure. The challenge is to make it available in more rural areas.
Availability and internal costs for customer service
You need to have service available at any time and no matter how many people ask for your service. This creates high fixed costs.

Back to Companies & Stories